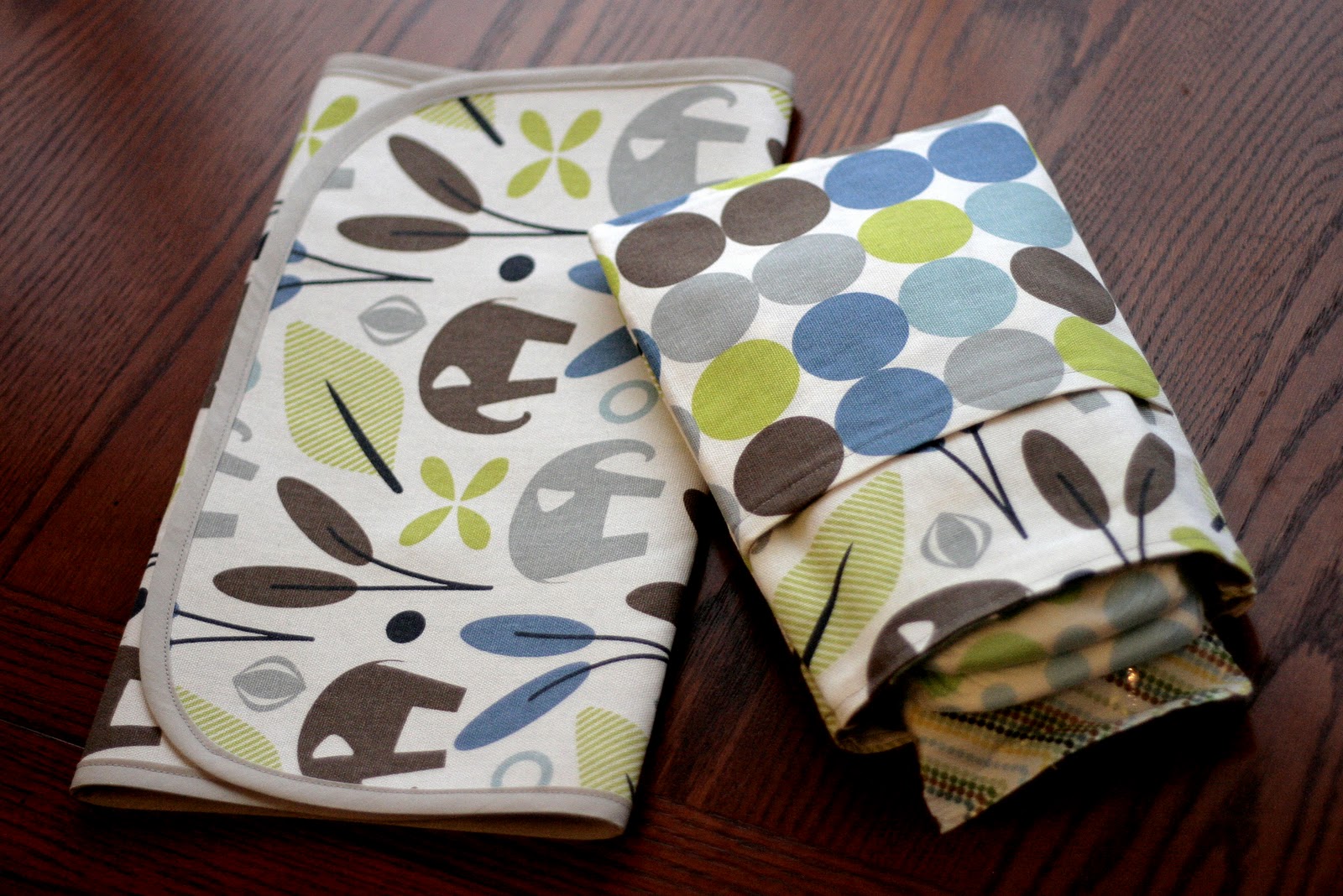 Before we get started, here’s a bit of my thought process on creating this design. I wanted something to help organize the diapers/wipes/changing pad in a diaper bag. I wanted it to be something that could be easily taken out of the diaper bag to go on a walk or just to take into the bathroom. And I wanted to be able to get to either the wipes, the diapers, or the changing pad without having to open up the entire pouch. I looked for existing tutorials but everything I found was either just a pouch for diapers and no changing pad, or the changing pad was the pouch so it had to be opened up to get anything out. So I came up with this design that has a large pocket for a few diapers and a wipes package/case with a small outer pocket for a changing pad. This changing pad has a waterproof side that can be easily wiped up.

Cut a rectangle 24 x 14 out of your top and bottom fabrics, and a slightly smaller rectangle out of fusible web like Wonder-Under (affiliate link), which I’ll refer to as WU, about 1/8″ smaller on all sides. In this photo I originally used fusible fleece so there would be a little padding. But I discovered that when it’s folded up it’s just too bulky so halfway through I changed over to the Wonder-Under fusible web. I used a home-dec weight fabric (the elephants) and a blue flexible wipeable fabric (technically called PUL-polyurethane laminated fabric). The blue PUL is soft on one side and plastic-ey wipeable on the other side. I like that it’s really flexible and easily folds up without getting crinkly or sticky like vinyl. 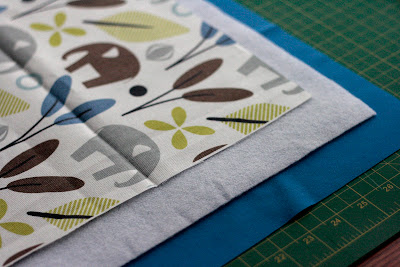 Next I ironed the WU to the elephant fabric then peeled of the backing. Then I placed these 2 layers on top of the PUL and ironed the elephant side again. I couldn’t iron from the PUL side since it would melt but doing it this way worked fine. 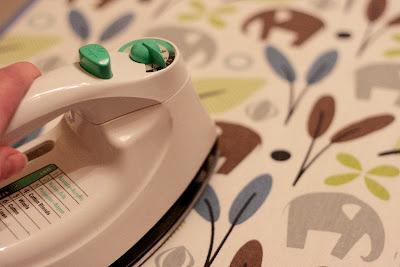 Once my 3 layers were fused together I traced the curve of a bowl in each corner for rounded corners. 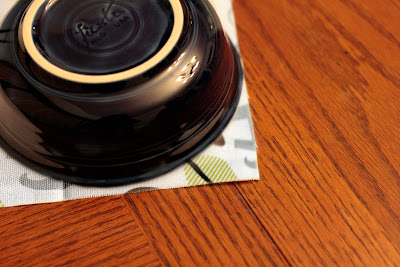 After cutting out the rounded corners I stitched 1/2″ bias tape around the whole thing and that was it! One cute, custom, changing mat. If you’re worried the fabric layers aren’t going to stay together when adding the bias tape you may want to stitch around the outer edges first. 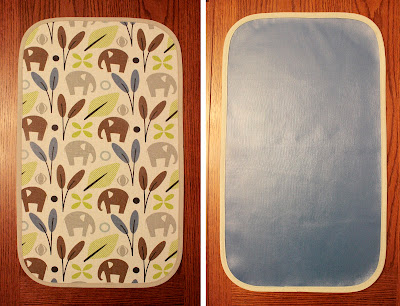 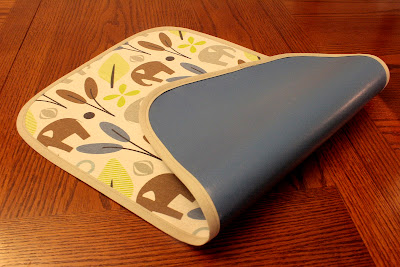 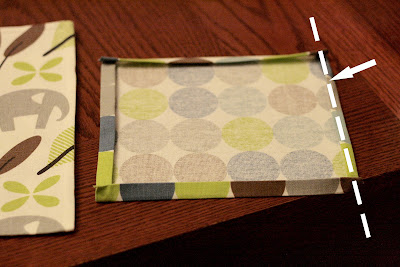 Now put that aside for a moment while we work on the pouch. Cut two strips of fabric 21 x 8.5. Put right sides together and sew down the sides with a 3/8″ seam allowance. 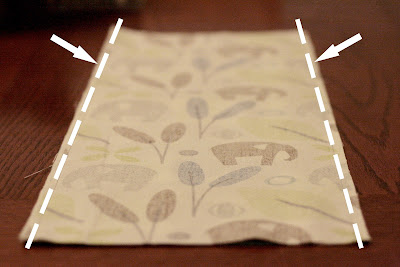 Turn right side out, fold the ends inside 1/2″ and stitch them closed about 3/16″ from the edge. 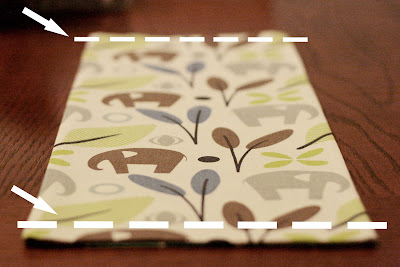 Next, fold the strip in half and crease or mark with a pin so you can see the center. Pin your pocket into place. Then stitch along the bottom edge of the pocket 3/16″ from the edge. The sides of your pocket are still the folded edge that hasn’t been stitched. 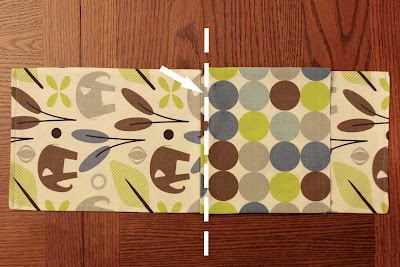 Next, fold the strip in half with right sides together. As you’re looking at the photo above, you would be folding the left side over top of the right so your pocket is on the inside. Stitch along the two sides 3/16″ from the edge. Then turn right side out and you have your diaper pouch with changing pad pocket! Here’s a view of both sides. This is a forgiving pattern so if you’re a little off on any of the seam allowances it shouldn’t be a problem. 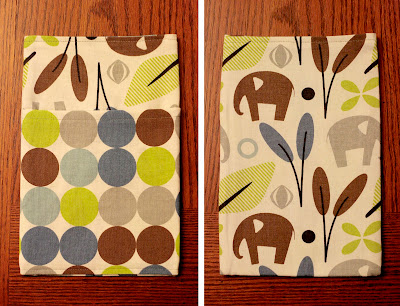 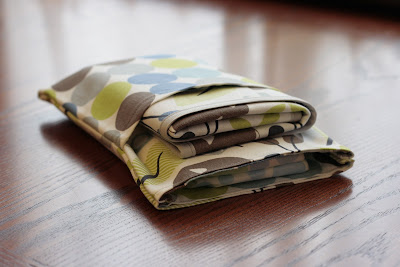 And if you need more ideas, you can find my instructions for matching appliqued onesies here!
Total
67
Shares
Share 64
Tweet 0
Pin it 3

Tutorial: A Pillow for Remote Controls

Which Is A Better Singer or Brother Sewing Machine?

Which Is Better Janome or Brother Machine?

Sewing Made Easy: 5 Storage Solutions for All Your Supplies